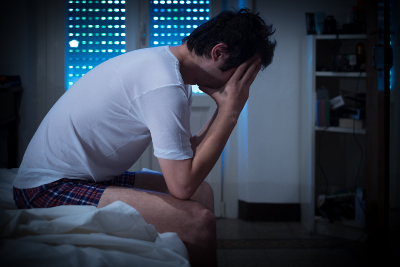 Obstructive Sleep Apnea (OSA) is a life-threatening sleep disorder that negatively impacts the health and quality of life of millions of Americans.

OSA is caused by a blockage of the airway during sleep, usually when the soft tissue in the rear of the throat collapses and closes, often causing snoring. During snoring the inability to inhale oxygen and exhale carbon dioxide upsets the balance of oxygen and carbon dioxide in the blood. The brain senses the low level of oxygen and increased levels of carbon dioxide. It sends a signal to resume breathing and cause an arousal. The frequent arousals inhibit the normal sleep cycle and result in fragmented sleep. This makes the patient feel very sleepy during the day and complain of a feeling unrested.

In central sleep apnea, the airway is not blocked, but the brain fails to signal the muscles to breathe. Mixed apnea, as the name implies, is a combination of the obstructive and central sleep apnea. With each apnea event, the brain briefly arouses people to resume breathing. Again, sleep is extremely fragmented and of poor quality with both central and mixed sleep apnea.

Obstructed breathing is very noticeable to a bed partner: the sudden cessation of a partner's breathing is quite alarming. Once aroused from deep sleep, people with sleep apnea may snore, gasp, or choke. Often these symptoms wake the sleeper, the bed partner, or both.

The Effects of Sleep Apnea

The effects of sleep apnea range well beyond snoring.

Did you know Excessive daytime sleepiness is responsible for 20% of all major car crash injuries?

Risk factors include being male, overweight, and over the age of forty, but sleep apnea can strike anyone at any age, even children. Sleep apnea can occur in thin people as well. A lack of awareness by the public and healthcare professionals leaves most people undiagnosed and untreated.

Further risk factors include obesity, hypertension, cardiac arrhythmia, ischemic heart disease, and hypothyroidism. The most common cause for sleep apnea in children is tonsillar hypertrophy.

How to Diagnose Sleep Apnea

Snoring is a major symptom of obstructive sleep apnea, and a sign of partial upper-airway obstruction. However, even though snoring is a very common sleep apnea symptom, it is possible to have sleep apnea without snoring. Likewise, snoring is not a definitive sign of sleep apnea: many people snore without experiencing sleep disorders.

If you suspect you or someone you care about has sleep apnea, contact Dr. Stern immediately Dr. Gloria Maczuga-Stern has practiced general dentistry in New York and Connecticut for 19 years. Her own personal experience with TMD led her to pursue further training for her pediatric, adult, and geriatric patients. At the Center for Sleep & TMJ Disorders she has been providing conservative, non-invasive treatment to patients with sleep breathing and temporomandibular joint disorders since 2008.

Dr. Stern strives to provide her patients with the highest level of care. Passionate about continuous education, she has over 2,500 hours of advanced education including orofacial pain, tmj disorders, and sleep disorder dentistry. As a result she is able to offer her patients the latest advancements in this field.

Dr. Stern received advanced training in temporomandibular disorders and sleep disorder dentistry from the Institute of TMD and Sleep Disorders and the Craniofacial Pain Center at Tufts University, and is a Diplomate of the American Academy of Dental Sleep Medicine as well as a Certificate holder of the of American Academy of Integrative Pain Management.

Get Relief from Snoring - Yours or Theirs!

When you sleep better
you live better.

Are you looking for a non-surgical and quiet solution to stop snoring and sleep apnea?

Do You Have Facial Pain?

Is facial pain affecting your sleep?